How To Make Friends: Stop Being Boring! 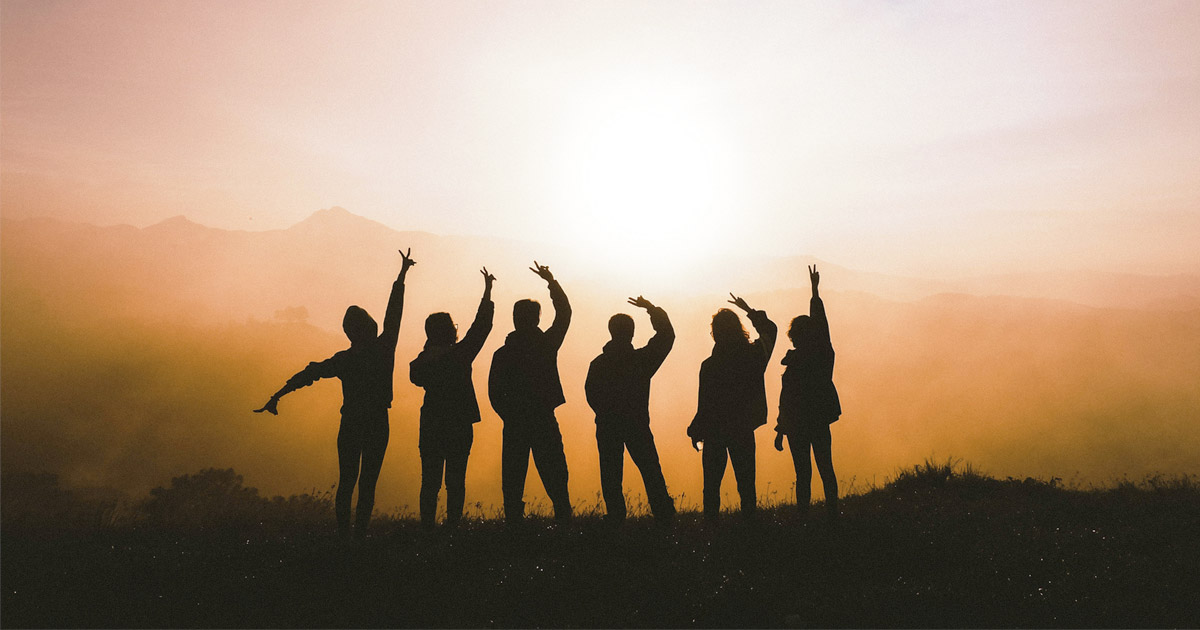 No one wants be friends with the boring guy or girl, right? But “boring” is a habit… and making friends becomes easy when you break that habit.

Maybe no one’s ever told you that you’re boring, but you sometimes get a sinking feeling in your stomach that hints at it. Or maybe someone has told you straight up, and it makes you feel like a worthless sack of lingonberries.

You’ve always wanted to be interesting and fun, so that you can make new friends, but you’re trapped inside the prison of your limited social skills. The prison bars are made of your own negative beliefs and you just can’t seem to squeeze through them.

If there’s one thing you’re good at, it’s tricking yourself into believing that you suck. How fun. Though the fact that you did this to yourself is actually good news, because you can turn it around.

When you were only 4-feet tall you were all about fun. You were an explorer learning to navigate your world, and you knew how to make friends naturally.

You burnt your hand on the stove. It didn’t stop you from playing with fire.

But then you learned that there were sometimes consequences to your actions, and doubt replaced abandon.

Take Little Pete, for instance. At 4-feet Little Pete had his first crush; we’ll call her Lacey. Their class was putting on a dance performance and the boys had to choose their partners.

Lacey already had a boyfriend she held hands with at lunchtime, but when the teacher told the girls they had to say yes to any boy who asked to be their partner, Little Pete saw his opportunity. Not one of the other boys moved, but Little Pete pounced! He didn’t give a fuck.

Lacey said no, but Miss Anderson sealed the deal. They danced together for the weeks that followed and Pete gradually won Lacey over — though he wasn’t sure what to do next with this new and unexpected state of affairs.

He avoided Lacey and repeatedly sent his best friend to ask her if she still liked him. That was the extent of their interaction together. She said yes for 3 glorious days then obviously changed her mind.

Little Pete was devastated. He had chosen to take the easiest option and ignore his true desires. He became a good little boring boy and for the next 10 years struggled with the irrational fear of talking to girls.

That’s not how you make friends, Little Pete.

There was a time when you too used to act first and think later. But not anymore. Now your mind predicts everything that could possibly go wrong, and it’s usually enough to convince you to take the boring option. 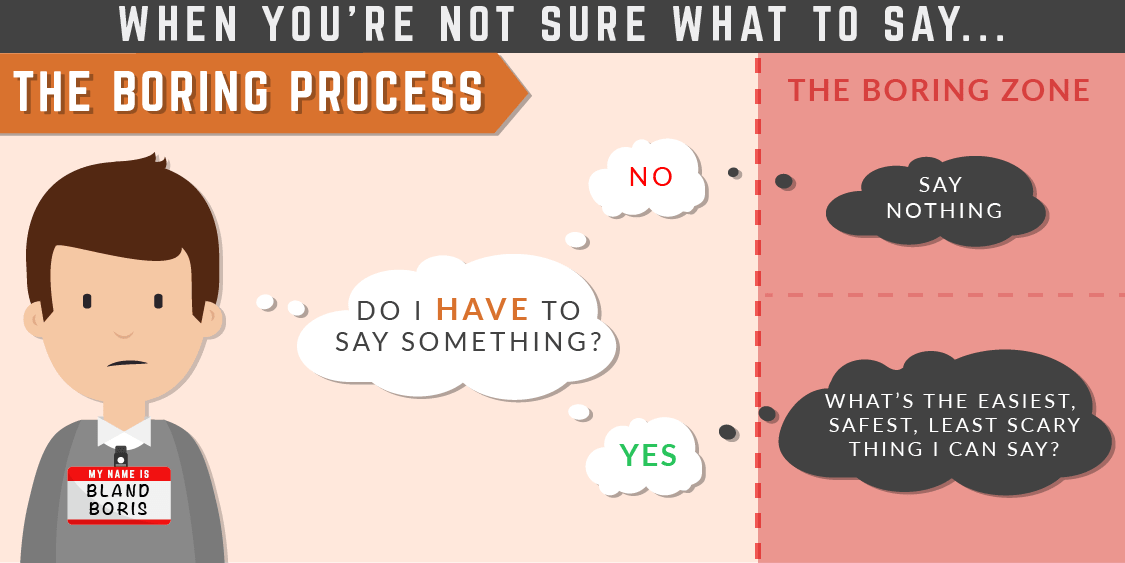 You’ve run this process over and over again in at least one or two areas of your life. Maybe more. You said no to your inner explorer.

THAT’s why people don’t want to be your friend.

But the good news is this. It’s not really YOU that’s boring. It’s the boring shit you choose to do. And all it takes to stop being boring, is to do something different.

Why Choosing The Boring Option Makes You Feel Like Mould

There’s a problem with the Bland Boris process. We designed it to keep ourselves safe, and we feel safe when we use it, but we hate ourselves afterwards — which isn’t safe at all.

Most people don’t actually dislike us when we’re Bland Boris, because we put none of our self into our actions, so there’s nothing to dislike. They just don’t see us at all, so they have no one to actually connect with.

If you truly want to make friends, you have to get naked, or at least show some skin.

I mean you have to give them something to like, by putting your self in your actions.

Yes, there is risk in not being boring. Some people might not like what they see when you stop hiding, but their disapproval means nothing once you find the people who do like you. Those are the friends who will fuel you. Being truly accepted for the weird monkey that you are inside is the greatest feeling in the world.

It’s a much bigger risk to be boring. You’ll never really make friends with anyone.

Imagine yourself in this situation:

It’s your first day at college. You’re sitting in the lecture hall and you haven’t made friends with anyone yet. The speaker asks for a volunteer to stand up and tell the class about themselves, as an ice-breaker.

Most people in the class will suddenly become Bland Boris. They’re not sure what to say so they say nothing. They hide.

And if they’re singled out they take the easy option. They share as close to nothing as they can:

“Hi, I’m Boris and I like drinking beer and eating pizza.”

Does that sound like you? Well everybody likes pizza and beer, damn it! Stop hiding.

If you want to make friends in college (or as an adult) you have to take risks. Be the one to open up first. You have to be okay with looking like a fool sometimes, because there’s more to gain than there is to lose.

It all starts with asking yourself better questions, which looks something like this… 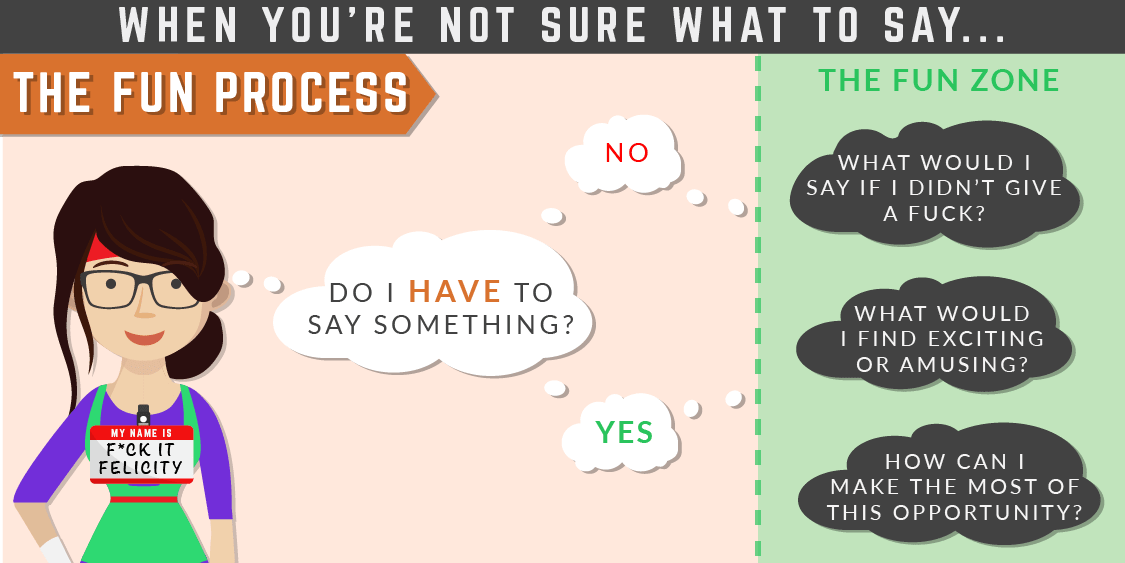 We stop being boring when we stop reacting to what we think other people want, and start creating what WE want.

So what does Felicity do when it’s her turn to share with the class? Her heart is racing from what she’s about to say. She’s scared but she wants to make friends, so fuck it.

“I levelled up my Mage in World of Warcraft and my guild is raiding a dungeon tonight! If anyone here plays WoW come say hi.”

Now everyone in the class knows something real about Fuck It Felicity. They have something they can talk to her about. They probably feel like they can make friends with her more easily.

And they’ve already forgotten about Boris.

How To Make Friends As An Adult

Becoming interesting can be scary at first. But you want it.

Do you know the combination of fear and desire that I’m talking about? That’s your green light. That’s your brightly-lit path away from boring.

Felicity doesn’t make friends easily because she’s more interesting than the average person. She makes friends because she gets “naked”. She expresses her opinion, steps on toes, chases what she wants — and people love her for it. Because she’s real.

The next time you’re unsure what to do in a given situation, try being Fuck It Felicity instead of Bland Boris. Start small, make mistakes and learn from them.

Bland Boris’ fears come from low self-esteem or insecurity. Most of us have his fears to some degree. Applying Fuck It Felicity’s approach can help you change not just your results, but also the root of the problem over time. So go get back in touch with your inner explorer and play with fire.

A real estate agent told me he wants to build trust with his clients. He tries to connect with them but the majority of the time they just give him one-word answers. The stress of trying to sell them a house gets in the way of connecting.

Bland Boris would act the way he thinks a real estate agent should act in this situation. He’d make polite small talk and tell the clients how spacious the bedroom is and how much light the living room gets because the windows face east, where the sun rises.

“Listen, before I show you some houses I want you to know that I actually care about you finding a home that makes you happy. Some agents just want to offload as many houses as possible but I can’t do that… I’d feel too guilty if I forced something on you. Plus, I’m a terrible liar. So I actually want to know what you like and what you don’t like. If you promise to tell me, I’ll promise to not pretend a crappy house is great for you.”

When you share things that feel scary, like this, people recognise that you’ve trusted them enough to share something scary. They admire that you’ve taken a risk for the benefit of connecting with them. You stop being boring, you become real, and they trust you back.

It’s rare to meet people who do this. That’s why connections like this often lead to genuine friendships.

So hopefully now that you understand what it takes to stop being boring, you’re one step closer to making real friends.

Absolutely powerful advice. I never imagined that one simple rule – to take risk in social situation – may have such a huge impact on becoming more interesting person. Thank you, you are doing a great job by providing this piece of advice on your blog.

Your writing about the most important thing to mankind.

Why be boring when we can flip things over and start enjoying ourselves?

I’m a big fan and I’ve been commenting before, since I funnel my thoughts on social skills out on the internet as well. Much like the way you do it over here at Beardstrokings.

Feel free to read my article on making conversations interesting:

Should have read your article beforehand for further inspiration… :-) Keep it going